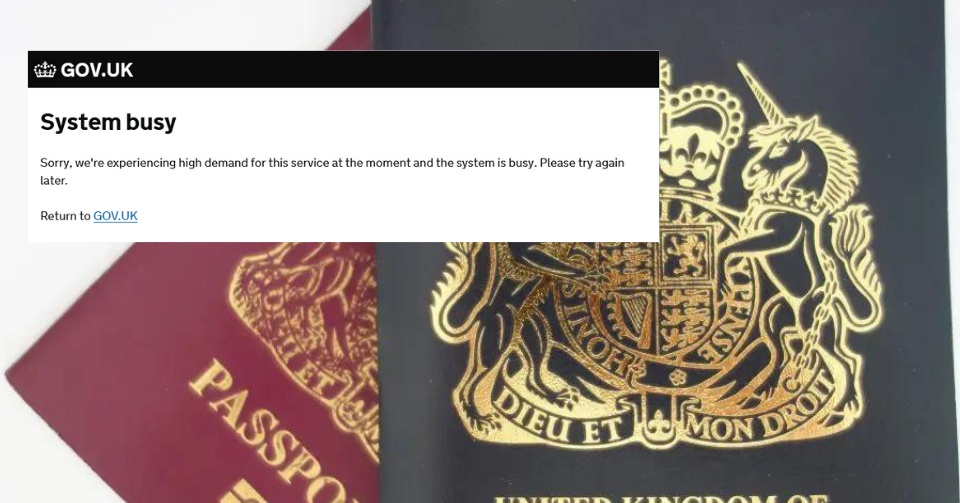 EasyJet has finally changed its rules to allow passengers with at least three months but less than six on their passport to board flights to European Union countries.

The change came as the Government issued a warning that it is taking up to 10 weeks to issue new passports due to a post-pandemic boom in applications.

And so many people have been trying to use the passport renewal fast-track service that the site has crashed multiple times, according to The Sun. It said those logging on see a message that reads: “Sorry, we’re experiencing high demand for this service at the moment and the system is busy. Please try again later.”

Despite official confirmation in November that passports must be less than 10 years old and must have at least three months remaining on the intended day of departure from the Schengen Area, easyJet and Ryanair continued to insist passengers to EU countries needed six months on their passport.

The UK Government also gave the wrong information initially and was forced to change its advice after admitting it had made a mistake.

EasyJet has now changed the statement on its website that previously said: ‘On your day of travel you’ll need your passport to have at least six months left on it’ after pressure from The Independent.

EasyJet has changed its online information to comply with the rules and confirmed the correct policy will be followed from today.

A spokesperson for easyJet said: “We are always reviewing the information we provide on travel requirements to ensure we’re making this as clear as possible for our customers.

“Having recently reviewed the guidance provided on government passport validity requirements, we have now updated this on our website to ensure they are clear and to avoid any misinterpretation.”

The airline has not explained why it failed to act five months ago when presented with official correspondence from the European Commission confirming the rules.

Thousands of passengers could now launch claims against the airline, The Independent says.

Passengers could be due flight refunds, plus denied boarding compensation, as well as other elements such as accommodation or car-rental.

The misrepresentation of the rules has caused many travellers to renew their passports needlessly, adding to pressure on the overstretched passport offices.

Those who paid a premium for fast-track passport renewals because easyJet misinformed them may also have a claim.

Ryanair has yet to follow suit. The Independent reports passengers were wrongly turned away from a flight to Lisbon from Stansted on Tuesday.