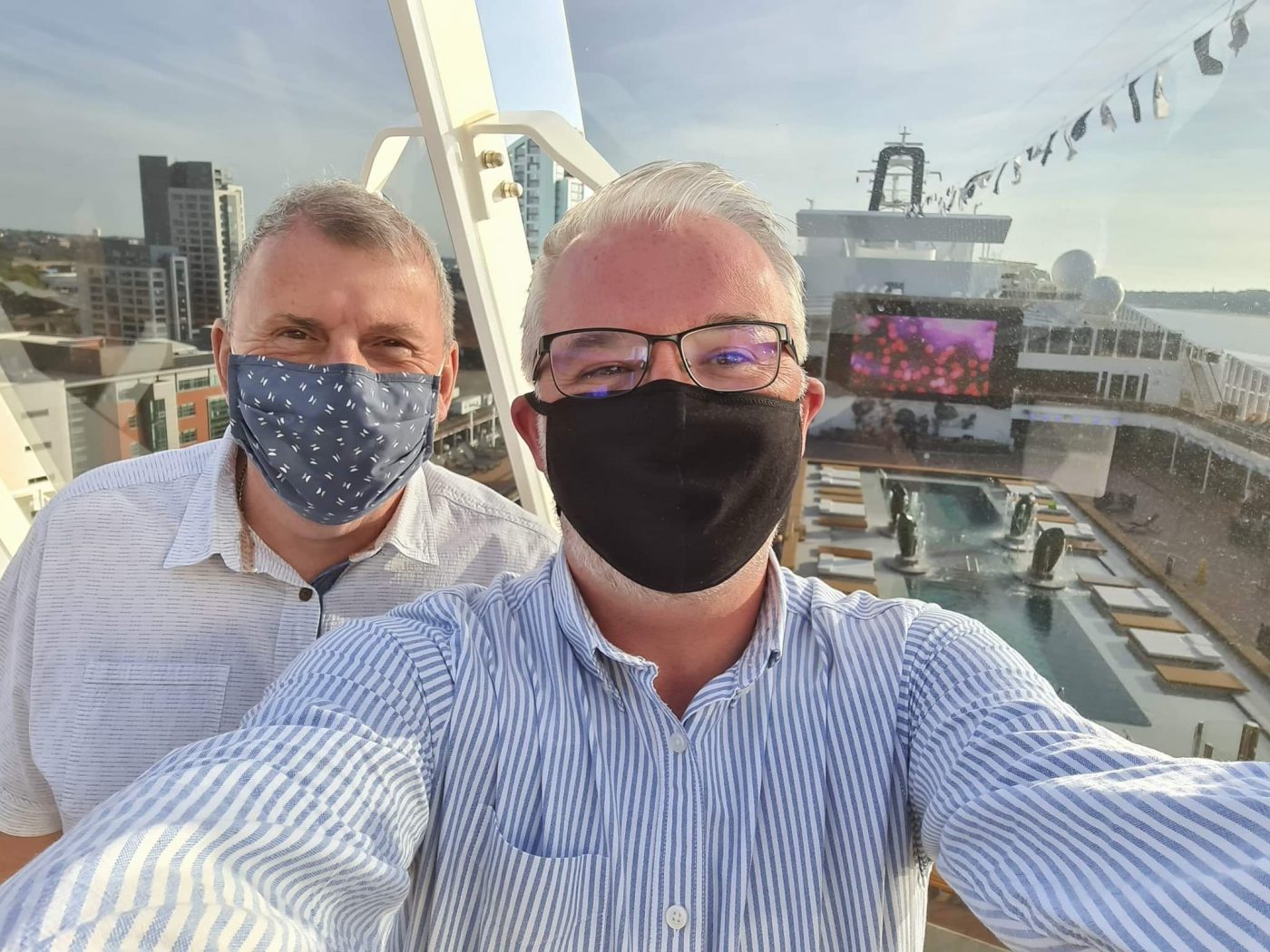 Travel agents are dismayed at Scotland’s last-minute decision to ban MSC Virtuosa from docking in Greenock, while those onboard the cruise ship say they’re baffled.

The ship was meant to arrive at Greenock, near Glasgow, this morning, where passengers already onboard had booked excursions and new passengers were due to get on.

Among those on board are Joseph Rajkovic (pictured, right) and John Wilson (left), Owners of 2J’s Travel, in Wedmore, Somerset, who joined the ship in Southampton on Saturday.

Joseph found time between relaxing in their private hot tub and enjoying pre-dinner drinks in the Champagne bar to tell Travel Gossip why he – and many other passengers – don’t understand the Scottish Government’s decision.

“We think the Scottish Government got it wrong. It seems ridiculous for them to make such a decision. We have our temperature checked every day and there are only 800 onboard, so it’s easy to socially distance. Everyone’s being really good and respecting the rules.

“There’s so much space on here and it feels safer than going to the supermarket, or going on holiday to Devon or Cornwall.

“This is the first chance people have been able to get away and the first stop was at Greenock. MSC had organised excursions and the excursion desks were showing they were full. Now no-one can get off and no-one can get on from Scotland.

“The first we heard was when we got back to the cabin at around 3.30pm to find a letter from the captain saying they were really sorry but the Government won’t allow the ship to port and that we will be in Liverpool for an extra day.

“Our Government is saying ‘stay in the UK this summer’, but Scotland is saying ‘don’t come here’.

“However, the weather’s been lovely here in Liverpool and the bars are well stocked. MSC has been brilliant and couldn’t do more to make everyone feel settled.”

Joseph, who is from the Liverpool area originally, managed to wave to his parents on Tuesday morning in port.

“Mum and Dad arrived this morning and pulled up next to the ship and we had a phone call and a wave. You can get off if you are doing an excursion, but I wouldn’t have been able to see them as it’s so strictly controlled. You have to stay within your excursion group.

“The rules are there for a reason and that’s why we’re baffled about the Scotland ban.”

The ship is now scheduled to leave at 7pm tonight, on its way back to Southampton.

“This is so sad,” said one member. “And ridiculous, given that you can drive there with no issues.”

Another said: “There are only UK residents on board so they can travel by air or car or train! Has the whole world gone mad?”

Another Travel Gossiper described the move as ‘an absolute joke’, saying the Scottish Government had ‘screwed us over again at the last minute’, leaving agents with ‘more c**p to deal with’.

“Even staycations are not turning out as advertised,” another agent said.