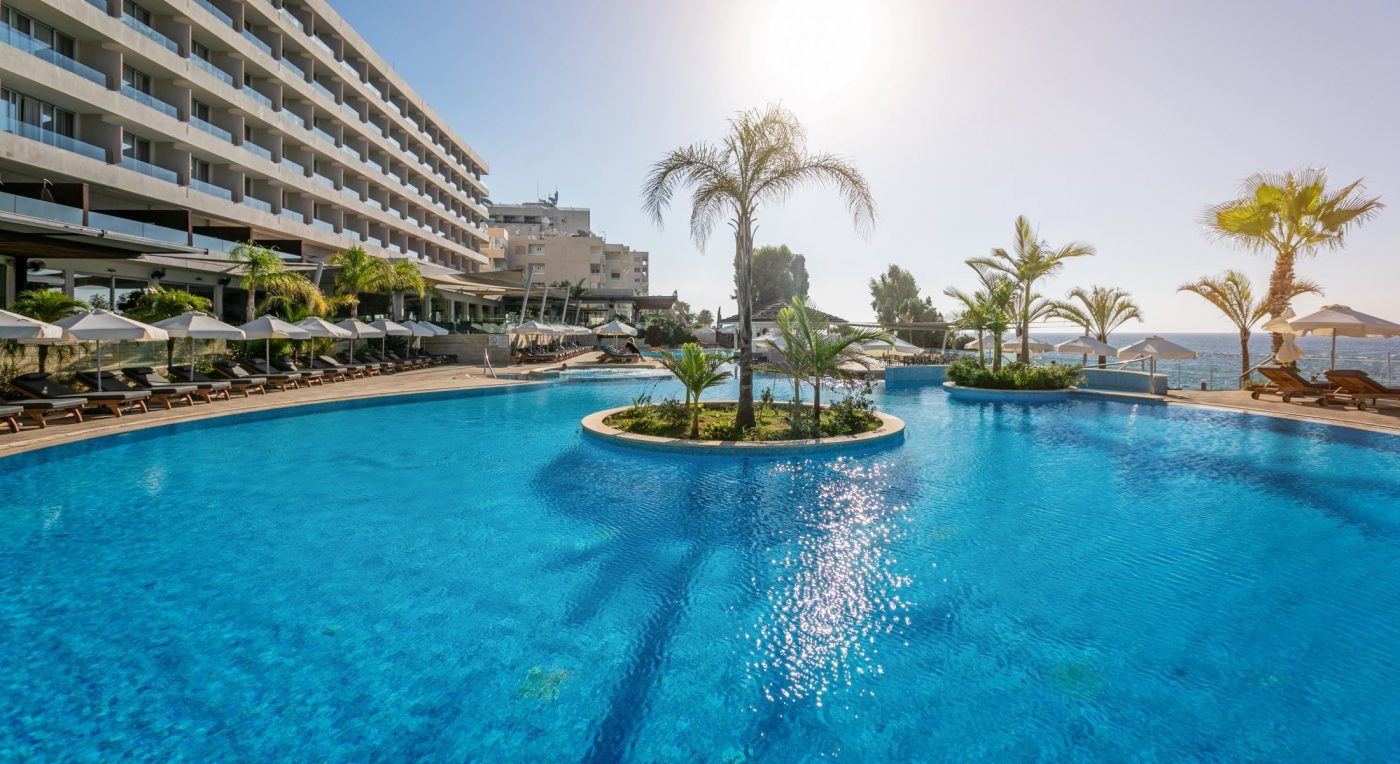 For clients craving some winter sun, Cyprus is one of the most accessible destinations, and Louis Hotels has several properties open year-round in Paphos and one in Limassol.

While both hotels ticked many of our boxes, we chose the Royal Apollonia as our Pick of the Week.

Situated on a narrow sandy beach in the heart of Limassol’s tourist district, the Royal Apollonia is slightly closer to Paphos airport but also easily accessible by road from Larnaca airport.

There are lots of international cafes and restaurants strung out along the busy main road either side of the hotel, but for clients who want to venture further afield, the Royal Apollonia is a great base from which to explore traditional Cypriot villages in the Troodos mountains, which are just a short drive away.

The Royal Apollonia has a dizzying choice of nine different room types, ranging from standard rooms with inland views to spa rooms with private Jacuzzis on the balconies to honeymoon suites.

Ours was a superior room with a roomy, glass-fronted balcony overlooking the fabulous pool area and the never-ending sea.

The room was large, the décor modern and fresh with a cool, off-white tiled floor, blond wood and splashes of aquamarine, the king-size bed was soft and comfy, the bathroom small but spotless and well-equipped.

There was also a TV with some international channels, minibar, tea and coffee-making facilities, and each day we were delivered a delicious fresh fruit platter.

It was blissfully quiet, the blackout curtains ensured undisturbed sleep, but it was glorious to whip them back in the morning to see the sun sparkling on the sea.

There are three restaurants; the buffet-style Dionysos, plus Meze by Elliniko, a Greek speciality restaurant, and Akakiko, advertised as a Japanese restaurant but the menu features Thai dishes alongside traditional Japanese sushi and chicken katsu burgers.

The Royal Apollonia offers bed and breakfast, half-board and ultra-all-inclusive packages. The latter includes one set-menu meal at both Meze and Akakiko each week. Both have covered outdoor terraces overlooking the pool, but we ate inside on one of our two evenings as the nights are a little cool for outdoor dining in early November.

Breakfast is served at the Dionysos, which also has a large, covered outdoor terrace overlooking the pool and the sea. The choice is extensive, with scrambled eggs, pancakes, fruit, yogurts and cereals offered alongside olives, breads, cheeses, hams and Cypriot pastries.

The lunch buffet at Dionysos includes a choice of meat, fish, chicken and pasta dishes, my favourite was a casserole of pork marinated in white wine and coriander.

In the evenings, there’s mellow live music in the spacious Aphrodite lounge, which extends from the hotel lobby to an outdoor terrace, and has a sophisticated, relaxed atmosphere.

The expansive figure-of-eight shaped outdoor pool with swim-up bar is one of the Royal Apollonia’s key selling points. Located just above the beach, with unobstructed sea views, it’s a fabulous area to relax and unwind.

Open all year-round, the pool area still had a holiday vibe when we visited in early November; even though the hotel was only around 60% to 70% full, the majority of the sun-loungers were occupied.

In the afternoon, the Ocean Blue Pool bar plays chilled out music, but if you want some peace and quiet, there are other, adult-only sun terraces overlooking the sea. Alternatively, it’s just a few steps down to the beach, where there are a handful of sun loungers reserved for hotel guests.

There’s also a small pool inside the hotel’s spa and a small, shaded children’s pool.

You could spend an entire week being pampered at the hotel’s Royal Spa, which boasts an extensive menu of treatments from manicures to full body massages and hydrotherapy treatments. Alternatively, you can just use the indoor pool, sauna, ‘Dead Sea Climatological Room’, or work out in the well-equipped gym.

I emerged glowing from a 90-minute Vitamin C+ Scrub massage and facial, my only regret was that I didn’t have time to squeeze in a manicure and pedicure too!

In addition to the children’s pool, there are bedrooms that sleep up to four people, which are ideal for families. The restaurants also provide highchairs, and there were a number of young children at the hotel during our stay.

That said, the Paphos Breeze seemed more family-friendly, with a more casual atmosphere and facilities that included a kids’ club (closed in the winter) and a schedule of daily activities including table tennis tournaments and games in the main pool, while adults could escape at the second, ‘relaxation’ pool.

Of the 204 rooms at The Royal Apollonia, two are suitable for wheel-chair users and the pool area, the spa and all the restaurants are accessible. The pool has a sweeping ramp for those unable to use the steps.

Who to sell The Royal Apollonia to?

It’s a great hotel for couples seeking relaxation in a smart, cosmopolitan hotel, also groups of friends looking for an out-of-season spa break in the sun.

It’s definitely worth booking a sea-view room as it would be such as shame to miss out on an early-morning eye-massage!

Also it’s a good idea to book the speciality restaurants and spa treatments ASAP as they’re all open to the public and very popular so tend to book up early.

Travel Gossip was a guest of Louis Hotels, which currently has a promotion for travel agents: for every booking of a minimum 5 nights in Louis Hotels in Cyprus or Greece, you get 1 night free for yourself for 2 people in the Louis hotel in Cyprus of your choice. Click the link https://louishotelspro.com/active-incentive-programs/ to register and claim your free nights!

A specialist agent has accused the Government of ‘constantly disregarding the travel industry’ and...
Read More

South Africa’s Tourism Minister has said the country remains open to travellers and insists it is...
Read More

The Government has defended its swift action on adding South Africa and five other countries in...
Read More