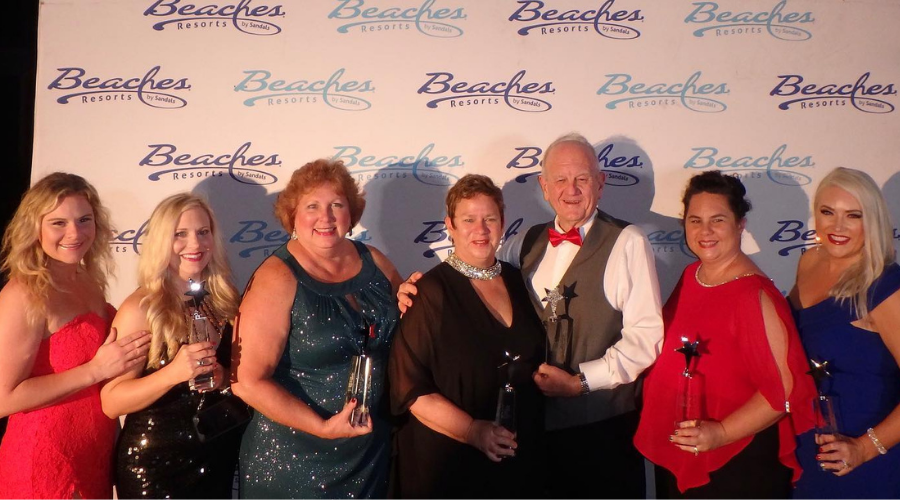 Two of the three holidaymakers found dead at a Sandals resort in the Bahamas were a married couple who owned a travel agency.

Michael Phillips, aged 68, and his 65-year-old wife Robbie, pictured in the centre of the photo above, owned Royal Travel in Tennesse.

Robbie called herself The Sand Lady on her blog, thesandlady.com, and specialised in selling Sandals resorts.

She had previously been named as Sandals’ top US travel agent and was one of its top 10 sellers worldwide.

In December 2019, she was recognised by Sandals Resorts International for her ‘outstanding achievement’ and she was invited into the Chairman’s Royal Club for 2020 for the ninth consecutive year, together with two of her colleagues.

Just hours before she died, she had posted photos of the resort’s beach on her Facebook page, saying she was there with her husband.

They were both found dead in their villa at Sandals Emerald Bay Golf & Spa in Exuma, Bahamas on 6 May.

Another man, Vincent Paul Chiarella, 64, from Florida was found dead in another villa at the resort, while his wife Donnis was found paralysed in bed. She was flown to a hospital in Florida where she remains in a critical condition.

Samples taken from the three victims have been sent to a lab in the US to expedite results and help authorities understand what happened, officials said on Monday.

The police commissioner of the Bahamas, Paul Rolle, said officials also collected samples from the rooms where the tourists were staying and the surrounding property to determine whether any contaminants were present.

“We really want to know what caused this,” he said.

The toxicology report from the lab in Philadelphia is expected this week.

It has emerged that all four Sandals guests went to a doctor the night before their bodies were discovered saying they felt ill. Mr Rolle said they went at different times and had eaten different things.

Sandals Resorts issued a statement earlier this week saying: “Out of respect for the privacy of our guests, we cannot disclose further information at this time.”