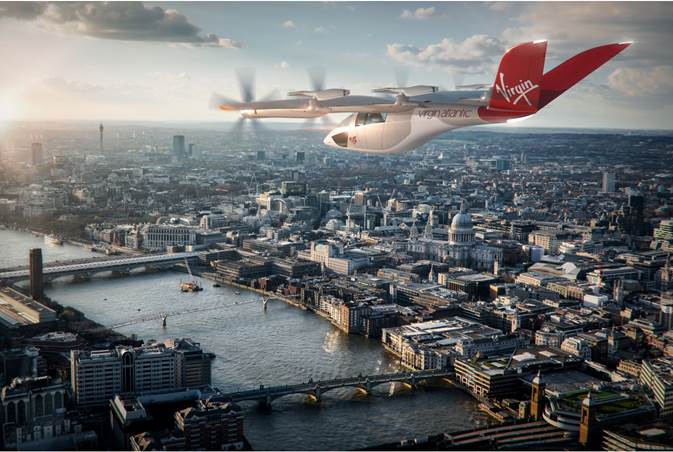 The airline plans to provide sustainable flights to hub airports, starting with London Heathrow, Manchester and London Gatwick, from cities up to 100 miles away.

It is looking to buy up to 150 eVTOL (electric vertical take-off and landing) aircraft from Vertical Aerospace as a part of a potential UK joint venture. However, no orders have yet been confirmed.

In a statement, Virgin said: “The goal is to enable sustainable, price competitive, regional connectivity across the first and last 100 miles of the customer journey.”

Virgin intends to use the fully-electric VA-X4  zero emissions, near silent aircraft with a range of 100+ miles, speeds of over 200 mph for the short flights.

The aircraft can carry only four passengers, but Virgin says ‘it is set to revolutionise urban mobility and electrify air travel’.

The aircraft will, it says, have certification to the same safety standards as commercial airliners.

Commercial operations of the VA-X4 are planned for 2024 following regulatory approval and certification.

A full-scale prototype of the VA-X4 is currently in production and the first test flight is planned for later this year.

Virgin says the aircraft could reduce the 56-mile journey from Cambridge to London Heathrow to just 22 minutes, in comparison to a 90-minute drive.

“With 37 towns and cities with populations over 100,000 within 100 miles of London Heathrow Airport, the VA-X4 offers huge potential to support zero emissions short haul transfers for 7.7 million customers outside of London, for flights to and from the UK’s main hub airport,” it said.