Tales from the Secret (Travel) Agent: the one about the dearly departed 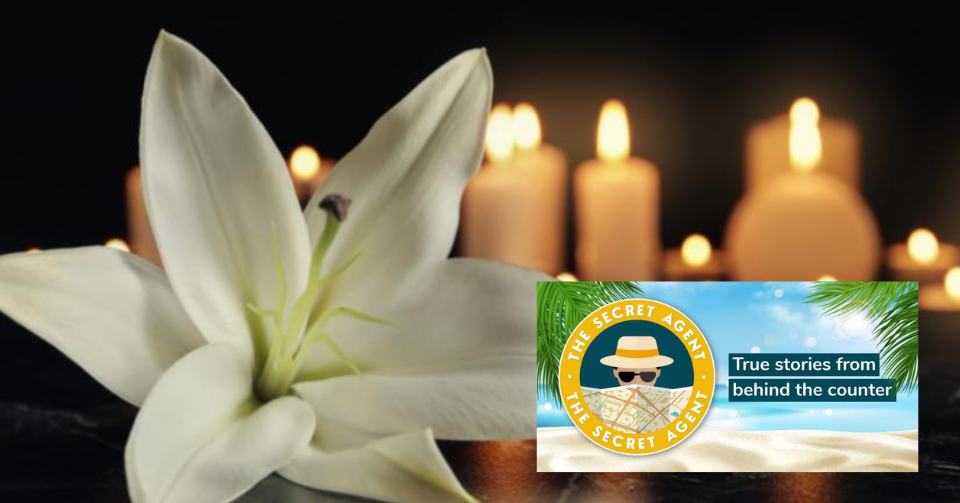 Meet Travel Gossip’s Secret Agent – a travel boss who pulls out all the stops to give clients their dream holidays.

In this episode, our Secret Agent bids farewell to a long-standing customer…

A lady calls in today to advise that a regular client has shuffled off this mortal coil and she thought she should let me know.

It’s always sad when you lose a client especially one that you get on with and, as the story unfolds, it seems he was taken out for lunch, which she says he ‘thoroughly enjoyed’.

He made it to the passenger seat of the car and promptly fell asleep. It was only when his nephew went to put his seat belt on carefully so as not to wake him they realised that a seat belt wouldn’t be needed and called an ambulance.

Alas, it was too late and Mr J departed this earth at 14:30 with a full belly and, I’m sure, the usual twinkle in his eye. Not a bad way to go.

After the bearer of the bad news had left I remembered other times in my career when we’d had to deal with the subject of death.

A young lady who worked for us back in the 90s booked a corpse from Athens to London at the request of his family as they wanted to bury him back in the UK.

She booked him a seat with Olympic Airways and it was only when the manager picked up the booking that he realised what she had done!

Another time, after the San Francisco earthquake in 1989, a lovely young Kiwi called Linda who worked for us took a call from a panicked mother who told her that she was really worried as her son was travelling in California and hadn’t been in touch since the earthquake three days ago.

Linda, in her broadest Kiwi accent, announced that she would ‘go and check the dead files’.

The dead files were where we filed details of people had departed for their flights/holidays.

I can still hear the poor mother’s screams down the phone from four desks away.

Finally – and a personal favourite: A lady I book told me her sister and her husband were involved in an accident on a cruise ship in 2014, where, during a storm in the afternoon, the husband was sadly killed when a window came in on top of him.

His wife, obviously in shock, was taken to her cabin and plied with tea and brandy. My client informed me her sister said the cruise line couldn’t do enough for her when she came down for her dinner at six.