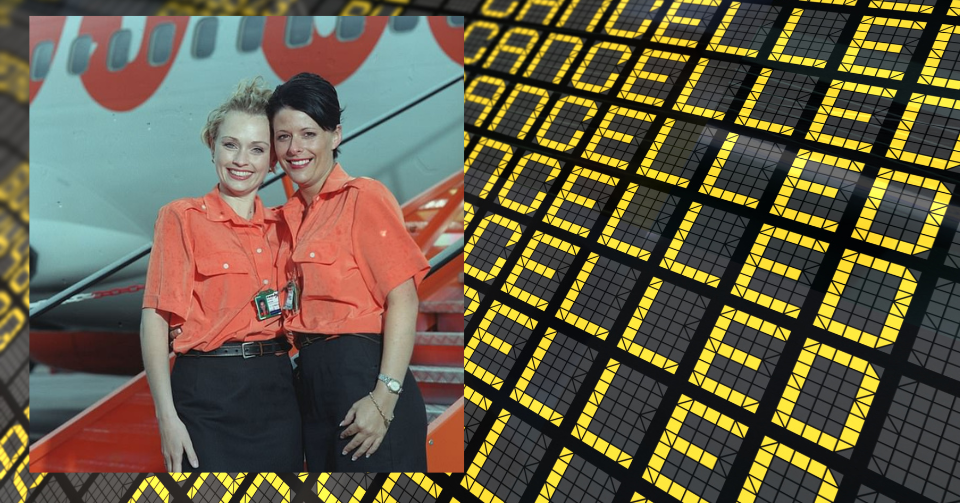 Travel agents are calling for easyJet to draft in Jane Boulton, its check-in trouble-shooter from the TV show Airline, to help sort out problems at Gatwick.

Jane (main picture, right), along with Katrina Batham (also known as Katrina Leeder, main picture, left), Leo Jones and others, became household names during the ITV fly-on-the-wall documentary, which showcased the work life of staff at airlines including easyJet. The series ran from 1998 to 2006.

Arron Mitchell, Director at Resfeber Travel posted on his company’s own Facebook page as well as the Travel Gossip Facebook group to ask: #whereisjaneboulton?

He said: “We know there has been a huge amount of disruption across the UK but what we really want to know, easyJet, is where exactly is Jane Boulton?”

He said a recent experience of a cancelled easyJet flight made him yearn for the days when Jane and her colleagues were around to sort out issues.

His Travel Gossip post led to dozens of likes as well as comments from other agents asking for Jane to return to help sort things out.

And Jane, who now works in learning and development as well as doing one-to-one coaching, told Travel Gossip she’ll go to Gatwick if she’s invited.

She said: “I find it quite amusing that people still remember me so long after the show.

“I do feel for the industry – obviously nobody wants to cancel a flight. I am due to go away with my family shortly too so am concerned.

“But, with the experience I have I understand it can be many things not just sickness. We are in a situation where many staff were let go or left.

“To recruit in this business takes time. It is a complicated and long road to someone being in full employment.

“I know of many crew that have returned and then decided they wanted to change and have since left again, so I can only imagine with the pandemic this has all had a part to play in the problems we see now people are ready to travel again.”

She added: “I would love to go back to Gatwick if anyone is offering.”

Arron told Travel Gossip: “I recently had a flight with easyJet cancelled at Bristol Airport and there was no-one there to help.

“All the check-in staff are DHL and cannot doing anything other than check in. They can’t amend or provide any kind of assistance with rebooking.

“Over the weeks I’ve seen the common thread of: ‘Where is easyjet?’ and I’ve thought back to noughties of Jane, Leo, Katrina and Leanne working their socks off to support easyJet customers and wondered why easyJet felt the need to remove such a pivotal point of contact.

“For me it’s such a breach of EU261, which states airlines have to provide assistance in rebooking onto other flights, even other carriers if need be, yet they are refusing to do that – everyone’s being referred to the app.

“They are, in my eyes, abandoning their customers. So, easyJet, bring back these pivotal roles and provide a decent level of customer service to your customers.”