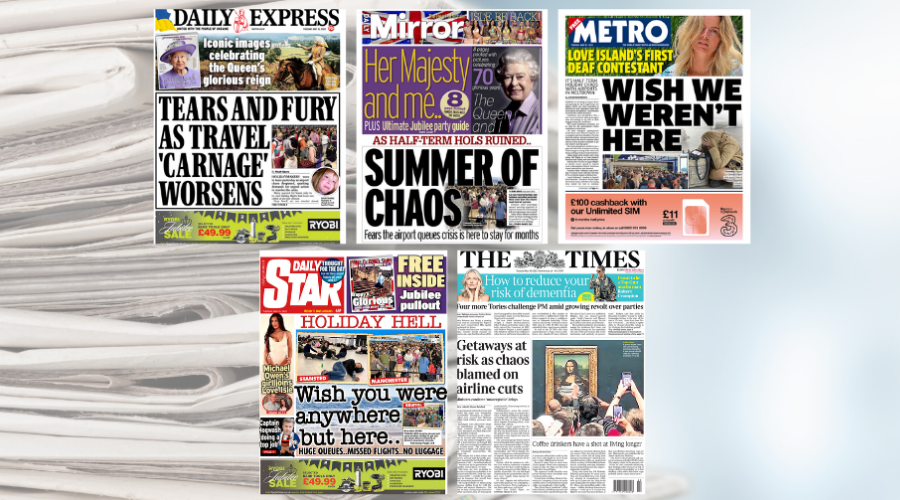 An MP is calling for the Government’s emergency council COBRA to sort out travel chaos as reports of widespread delays and cancellations were spread across the front pages of several national newspapers this morning.

The call came as the head of the UK’s biggest union, Unite, warned that the chaos being experienced by families over this week’s half-term holiday could continue throughout the summer.

Unite General Secretary Sharon Graham blamed airlines and airports for slashing jobs and wages during the pandemic for flight delays and cancellations.

She said: “During the pandemic, when airline operators and others in aviation slashed jobs to boost corporate profits, we warned this corporate greed would cause chaos in the industry.

“We are determined that workers will not pay for this crisis. Current pay and conditions in the industry are so poor that workers are voting with their feet.

“It can only be resolved by offering higher wages and better working conditions for staff. Unite is utterly determined to fight for that.”

However, Liberal Democrat MP and transport spokesperson Sarh Olney told the Metro the Government was also to blame and said the COBRA, which is the Government committee that deals with national emergencies, should intervene.

She said: “Ministers need to get a grip. Britain’s airports are a complete and utter shambles. It’s clear that both the airlines and Government have failed.”

She accused Transport Secretary Grant Shapps of being ‘asleep at the wheel’, adding: “Now is the time to convene COBRA and use every resource available to get our airports moving again.

“A failure to act today could see Britain’s Jubilee bank holiday marred in travel chaos, with ministers left to answer serious questions about where they were.”

Images of families sleeping on floors at airports have been splashed across newspapers today as flight delays and last-minute cancellations continue.

Among the late cancellations were TUI flights to and from Cyprus and one from Manchester to Turkey. Travel Gossip has asked TUI for the reason.

The operator had already axed a number of flights that were due to operate over the half-term holiday. EasyJet has also cancelled 200 flights over the 10-day period.

Reports in the national press suggest the worst hit airports so far this week are Gatwick, Stansted, Manchester and Bristol.