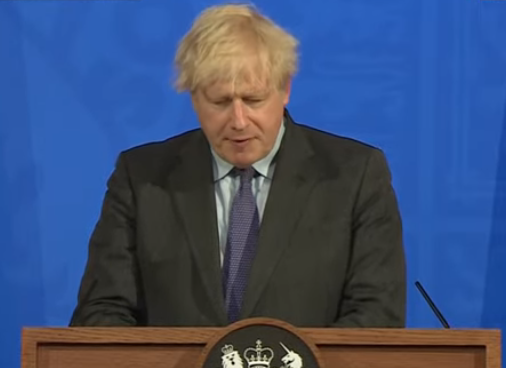 Prime Minister Boris Johnson said today that he didn’t see any reason to extend the furlough scheme beyond September despite his decision to prolong lockdown restrictions for up to another four weeks.

Speaking during a Downing Street briefing, he said the Chancellor Rishi Sunak had made it clear the Government would continue to support companies by paying a percentage of staff wages up to September.

At the briefing, the PM announced current lockdown restrictions, including a ban on nightclubs, would remain in place up to 19 July.

Mr Johnson also refused to clear up confusion about international holidays, caused by his Environment Minister George Eustace telling people to stay at home this summer and his Transport Secretary Grant Shapps suggesting travel would resume soon. “The most important thing is to follow the red, amber and green guidance,” said Mr Johnson. “I would not want to give any more guidance than that at this stage.”

In response to the briefing, ABTA Chief Executive Mark Tanzer said: “Today’s delay to the full reopening of the domestic economy, which follows on from the Government’s recent moves to severely restrict international travel, highlights again the importance of a rethink around ongoing financial support for businesses that continue to find their trade severely constrained by Government policy.

“The Government must look at extending the existing support measures for businesses, including delaying the increase in furlough contributions, extending protections from commercial landlords, and keeping full business rates relief, which are due at the end of this month.

“When it comes to travel businesses, ministers need to acknowledge that even once the domestic economy unlocks, they will continue to be under constraints within the traffic-light system.

“As we head into the critical summer season, where travel companies ordinarily earn the majority of their income, we must finally see a package of tailored financial support for travel agents and tour operators. Without this tailored support, we will continue to witness people across the country lose their businesses, many of which are independent family firms that have been in existence for decades, and many thousands more people will lose their jobs.”

The delay to the removal of the last remaining COVID restrictions, although not unexpected, was a blow to the travel industry, said Advantage CEO Julia Lo Bue-Said.

“We urge Government to ensure that whilst this domestic delay is implemented they must still allow for  international travel to return safely and in a risk managed way by properly implementing the Global Travel Taskforce’s plan for a traffic-light system,” she said.

“The Green List must be expanded in the next review on 24 June in line with the evidence, and with more proportionate restrictions.”

However, Transport Secretary Grant Shapps has already said that the domestic recovery must take precedence over the easing of international travel restrictions.

Lo Bue-Said added: “The Government must also bring forward a package of tailored financial support for travel businesses, including extension of furlough support, to account for the sector’s ability to trade and generate income being much slower than almost all other sectors.”

UKinbound CEO Joss Croft said: “Tourism businesses across the UK are balanced on a knife edge, struggling to remain viable while adhering to restrictions, and today’s announcement will put people’s livelihoods at risk and slow down the recovery of our towns and cities.

“Prolonging restrictions affects the whole tourism supply chain, in addition to hospitality business, and although health and safety must always come first, the Government must act swiftly and implement additional support measures for both hospitality and travel businesses.”