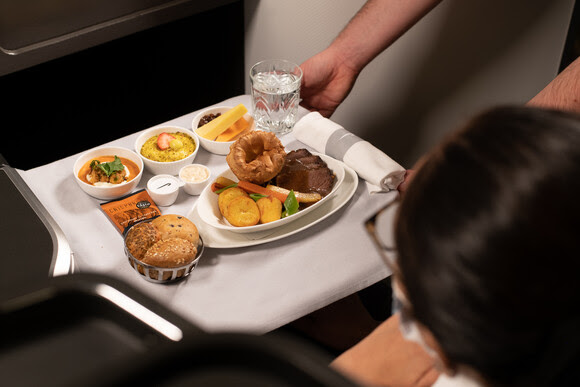 British Airways is adding a British roast dinner to its menu next month.

The airline’s new Best of British Menu will debut in September with a traditional roast of 21-day aged British beef, Yorkshire pudding and all the trimmings, or British roast chicken on flights to the Indian subcontinent.

“The airline has proudly worked with farmers, caterers and producers to find great quality ingredients, advocating farm to fork.”

Head of Inflight Sajida Ismail said: “As we look ahead to welcoming back customers who may not have flown for a while, we wanted to mark the occasion by offering a really special menu that celebrates the best of Britain.

“We are particularly excited to be offering a roast dinner on board. We know that Yorkshire puddings and crispy roast potatoes can be difficult to re-create at altitude, but our chefs have been working to make it happen, because we know that every British roast dinner should have them.”

Other dishes that will feature on the Best of British Menu include shepherd’s pie, sausage and mash and vegetarian options.

Best of British Menu is available to First and Club World passengers.

The airline has also re-introduced free water and snacks on shorter flights in the Euro Traveller cabin.